Livro sobre o percurso deRobert Rauschenberg, 2008
Preço
€11.32
Robert Rauschenberg is one of the greatest figures of the international art of the second half of the twentieth century. As an artist was involved in the practice of painting, sculpture , photography, performance , dance or theater , promoting an interdisciplinary approach that combines in a unique way, to the dawn of post- modernindade call. Centered in the first 25 years of production Rauschenberg , this book aims to provide the reader with a set of tools to help you identify the main routes which guided the work of this photographer in the 1950s and 1960s , as well as the assumptions on which rests largely their subsequent production. Mapping the developments that the practice of Robert Rauschenberg met between 1949 and 1974 , this number Collection reúnde also a significant number of critical perspectives that have come to dwell on their work , and whose diversity we can see the vitality and relevance that his work has nowadays.
CT000281 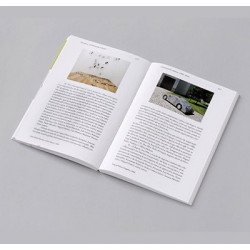